You may not be able to Multitask, but your iPad can!

iPadOS 15 makes it much easier to put two apps on your screen at once with Split View and Slide Over—it’s a big win for multitasking. Learn more here:


Apple Radically Improved Multitasking in iPadOS 15. Here’s How to Use It.

In iPadOS 15, while Apple has changed the underlying multitasking capabilities, it also has made them far more discoverable with onscreen controls and tips that supplement the previous gestures.

Use the Multitasking Menu

Most important is the new multitasking menu button that appears in the top center of every app, represented by •••. Tap it to reveal a control with three options—Full Screen, Split View, and Slide Over—and then tap one of those to put the current app into that mode. From left:

Use the App Switcher

Apple also made it much easier to see and manage your Split View combinations by using the App Switcher. Once you go into it by swiping up from the bottom of the screen (or double-pressing the Home button, if your iPad has one), you have several multitasking-related options: 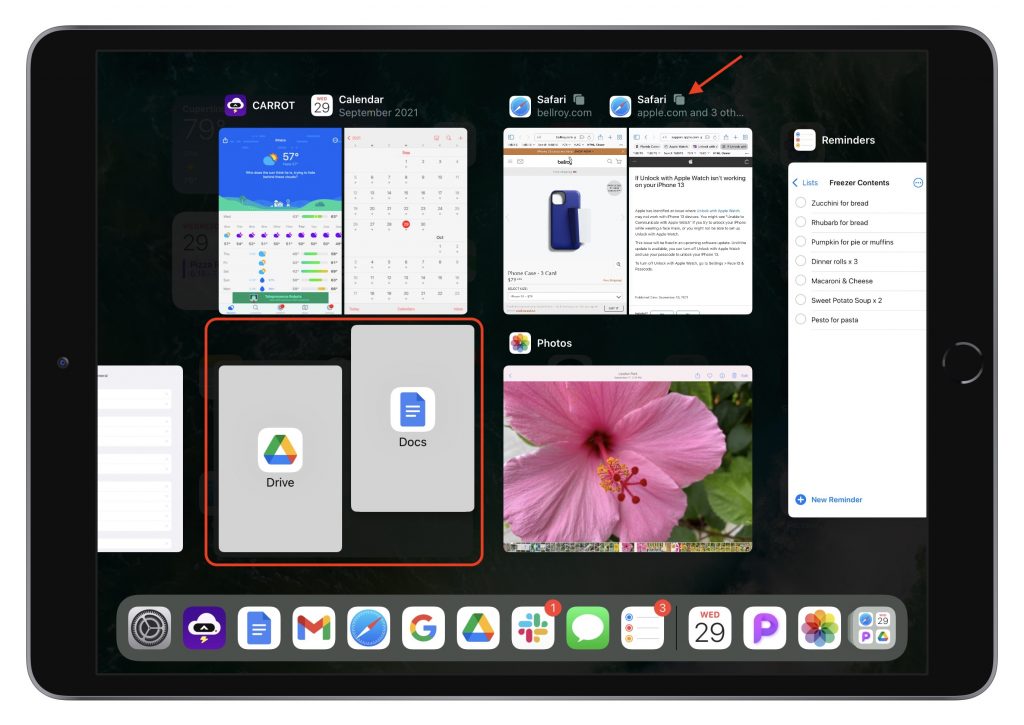 In the screenshot above, note the red arrow pointing to the little stacked square icons above the Safari Split View windows. Those indicate that the app in question has multiple windows. Tap the icon to display just that app’s windows in the App Switcher. 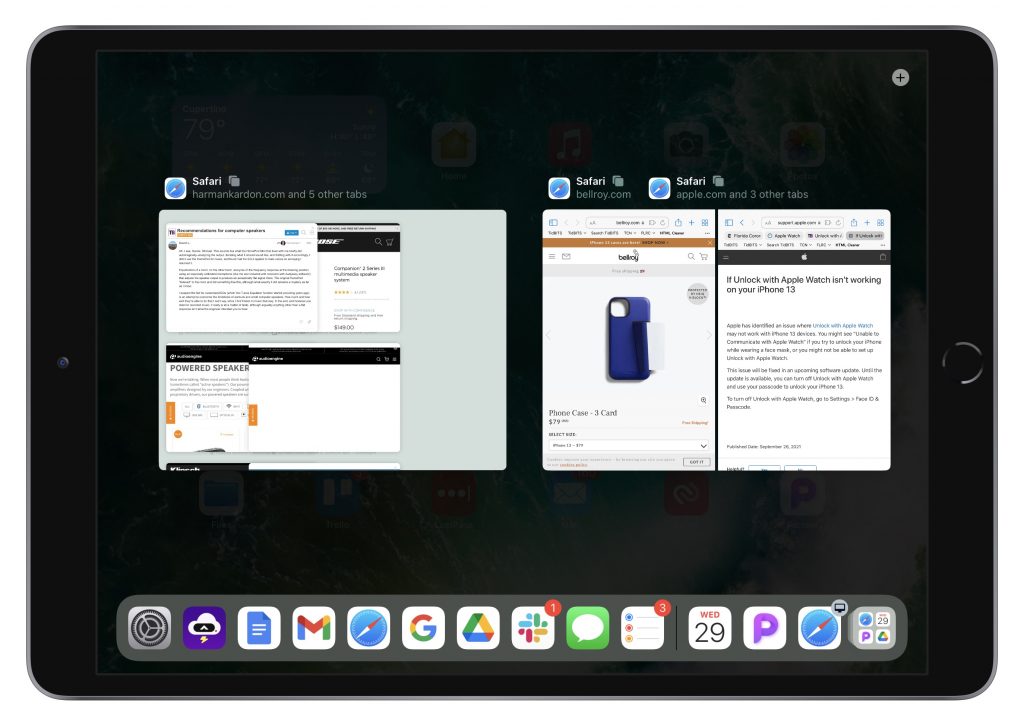 The App Switcher may make it easier to see and switch among multiple windows in apps, but another new multitasking feature, the Shelf, is even more useful. When you use the Dock or a search to open an app with multiple windows available, the Shelf displays them all at the bottom of the screen. The Shelf doesn’t appear when you switch to an app using the App Switcher or four-finger swipe, but you can bring it up at any time by tapping the multitasking menu button at the top of the screen.

When you’re looking at items on the Shelf, tap one to switch to it. You can also swipe up on windows on the Shelf to close them. As soon as you tap anywhere else in the app to start working, the Shelf disappears.

In at least some apps with sidebars, such as Mail and Notes, you can now open an item like a message or a note in its own window in the center of the screen. That’s useful for previewing the full content of the item, and you can swipe down on the multitasking menu button to put the window on the Shelf, which keeps it available for quick reference while you work on something else. To create a center window, touch and hold the item in the sidebar and then tap Open in New Window. To close it, tap Close or swipe up on its Shelf thumbnail. 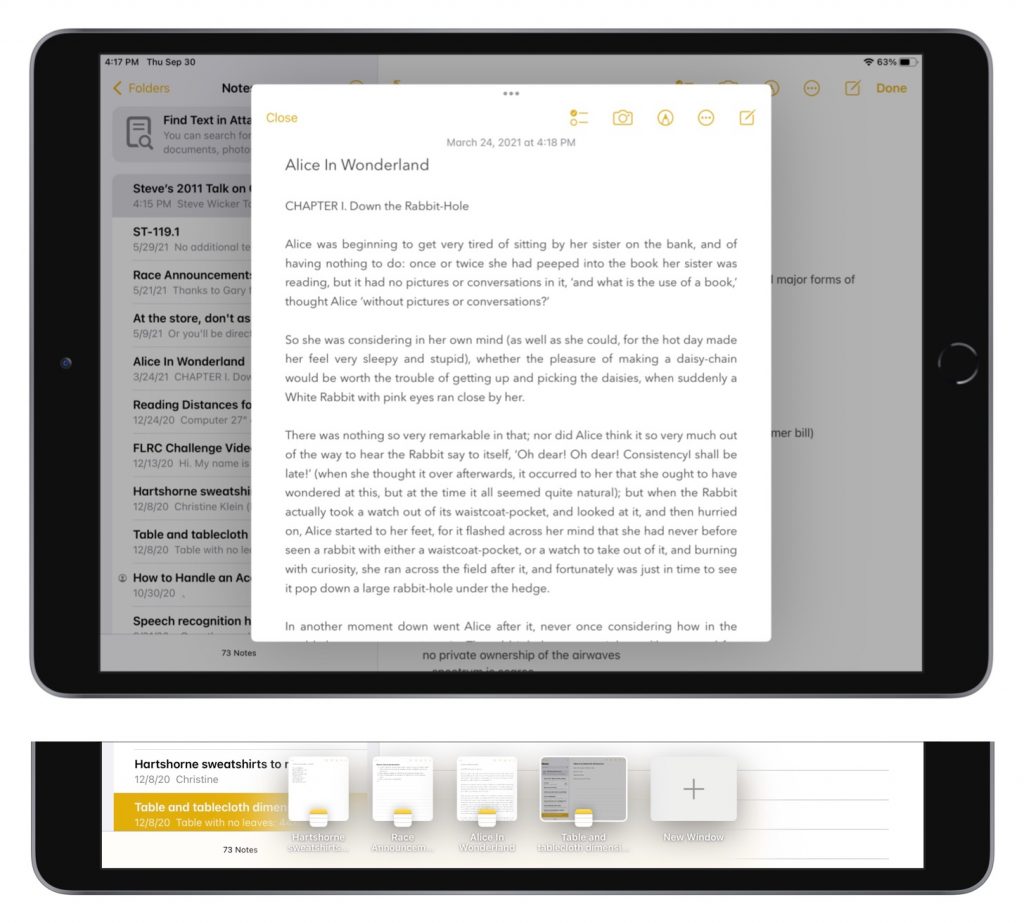 Use the Multitasking Keyboard Shortcuts

If you’re seriously interested in using multitasking on an iPad, you’re probably also working with a physical keyboard much of the time. In iPadOS 15, Apple added a useful set of keyboard shortcuts that you can learn about by pressing and holding the Globe key and then tapping the Multitasking tab at the bottom. It may take a little while to internalize the shortcuts, but if you do most of your work on an iPad, you will probably find the effort worthwhile. 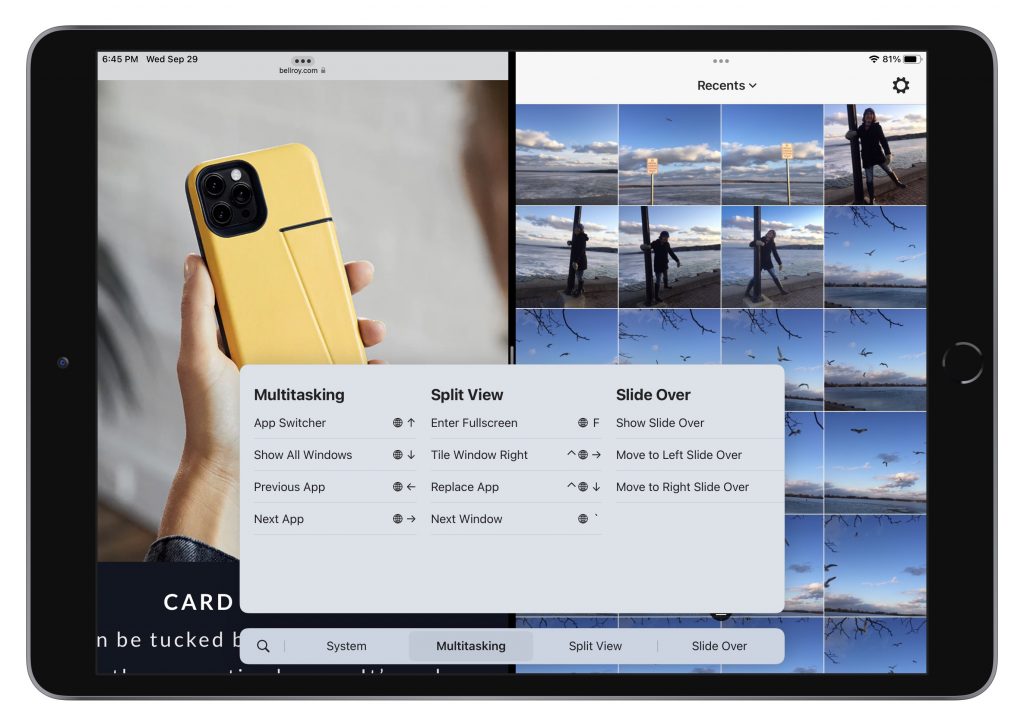 If you like the idea of multitasking on the iPad but have never been able to remember all the necessary gestures, iPadOS 15’s changes will be welcome. Give them a try—we think they finally make multitasking obvious enough for everyone.

← Prev: iPhone Migration to your New iPhone or iPad via Quick Start is the Way to Go! Next: iOS 15 can Identify Plants, Pets, and More Using Visual Look Up in Photos →